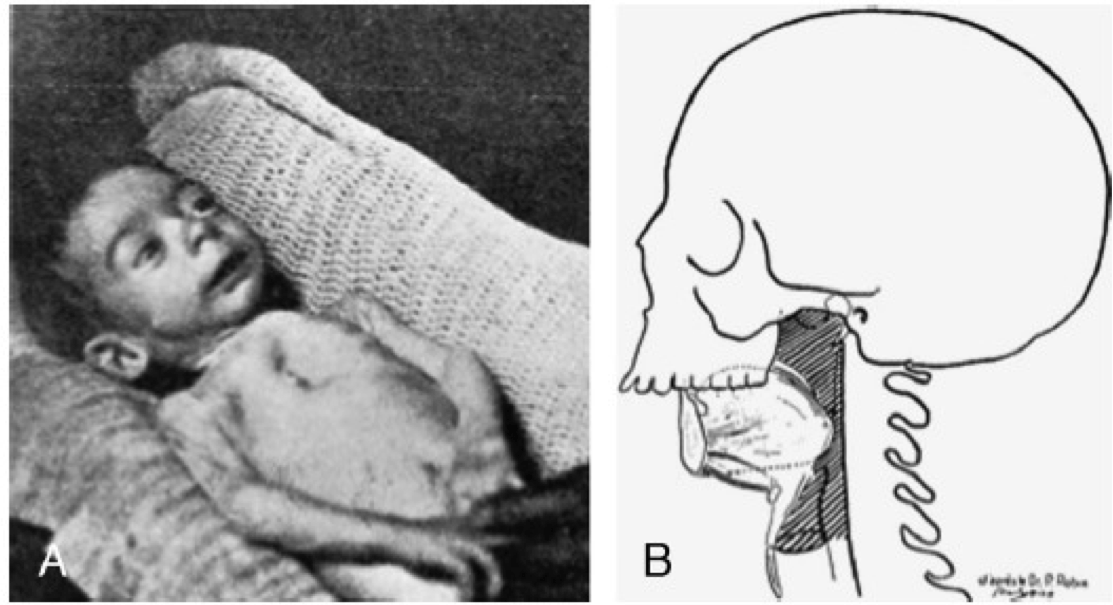 There is a large misconception that all patients with Pierre Robin Sequence have a Cleft Palate. They don’t.

Pierre Robin sequence was described in the late 1920s by a french stomatologist living in Paris, Dr. Pierre Robin. The original triad described by Dr. Robin was: Retrognathia, Glossoptosis and Airway Compromise. A large majority of patients have Cleft Palate, but Cleft Palate is not necessary for diagnosis.

The reason why cleft palate is common is the following (i will explain this in layman’s terms):

PRS is a sequence. Patients are born with a very small jaw (“Retrognathia”), thus the tongue has not much room to go anywhere and rolls back in the back of the throat (“Glossoptosis”). This then causes an inspiratory ball valve type of obstruction, causing breathing difficulties (Airway Compromise).

Moreover, during fetal gestation, the palate is composed of 2 vertical palatal shelves, that overtime become horizontal and fuse in the midline. If a fetus has a very small jaw, the tongue rolls back and up, and prevents the palatal shelves to fuse in the back of the throat, that is why 60-90% of patients with Pierre Robin Sequence have a U-shaped Cleft Palate.

So to summarize, the retropositioned mandible interferes with tongue descent and prevents normal fusion of the palatal shelve. This “U”-shaped cleft us seen in 66 to 90% of affected patients and is erroneously considered diagnostic criterion.

Usually the cleft palate is repaired at 9-12 months of age. The surgery takes approximately 1 hr and patients are kept one night at the hospital to monitor breathing and feeding.

Early surgical management of Pierre Robin Sequence is quite important. The consequences of early airway obstruction can be devastating and include:

If you have any questions with regards to Pierre Robin Sequence or Cleft Palate, come and visit us. Your Surgeon will answer all your surgical and non-surgical questions. This photograph is from Dr. Robin original article.