What is Congenital Nevus?

Pigmented Congenital Nevus is a skin condition that either appears at birth or forms within the first year of a child’s life. The nevus is characterized by a patch of skin that is dark-colored and often hairy. Congenital nevi are classified in three groups based on size:

Pigmented Congenital Nevi are typically found on the abdomen or back but also frequently appear on the upper thigh, arms, or palms of the hand. Very rarely, nevi can develop on the head, neck, and mouth area. 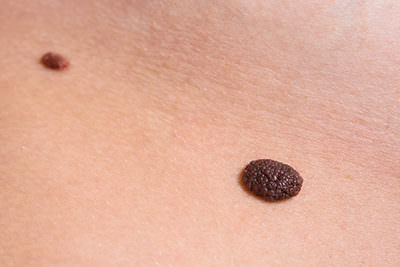 Congenital Nevi are caused by cell mutations during development of the embryo in the first trimester of pregnancy. It is believed that the nevus is formed when the melanin-producing cells (melanocytes) don’t spread evenly and cluster in a certain area. There is no way to prevent a nevus from forming.

The necessity for removal of a congenital nevus and the process used to remove it tend to vary depending on the location, size, and perceived risk of the condition. Treatment can range from observation to simple excision to excision and complex reconstruction.

Small- and medium-sized nevi are generally harmless but can be removed for aesthetic reasons. Removal of a small nevus consists of a simple excision, cutting out the affected area and stitching the surrounding skin back together.

Removing a large nevus is a much more daunting process. Depending on the magnitude of the condition, the nevus is cut out in sections. The skin must be replaced via skin grafting or tissue expansion. Oftentimes, this requires multiple surgical procedures and a complex reconstruction process.

Laser congenital nevus treatment is also an emerging option, but results are inconsistent in terms of success rate and eventual repigmentation.

To learn more about pigmented congenital nevus, please contact our Beverly Hills office by calling (310) 385-6090. If you are interested in how congenital nevus treatment can help you, schedule your free Skype consultation with Dr. Youssef Tahiri today.