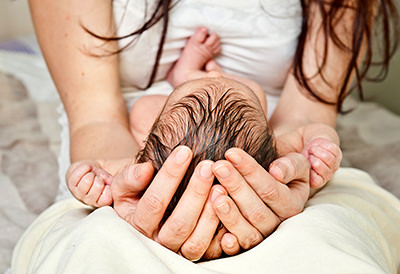 Craniosynostosis is a condition in which the sutures (growth seams) in an infant’s skull close too early, causing problems with normal brain and skull growth. Syndromic craniosynostosis is caused by an inherited or genetic condition and characterized by a collection of distinct facial and body anomalies that have a common cause. It can range from mild to severe.
While each syndrome has its own specialized characteristics, many share several common features, including skull deformities, midface deformities, wide-set or bulging eyes and a depressed nasal bridge. One common skull deformity that can occur with any of the syndromes is called a cloverleaf skull anomaly. The name comes from a tri-lobar skull shape that looks like a cloverleaf, accompanied by high forehead, prominent and wide-spaced eyes and low-set ears.

Does your child need treatment for syndromic craniosynostosis in Beverly Hills? Dr. Yousseff Tahiri has treated countless children with this issue. Because the craniofacial features can be very similar for these types of syndromes, the presence of limb and hand abnormalities such as short limbs, fused fingers or extra fingers or toes can be a differentiating factor in determining the accurate diagnosis.

Syndromic craniosynostosis is most commonly found in:

Patients with syndromic craniosynostosis often have related health and developmental issues, reinforcing the need for coordinated, multidisciplinary care and access to a variety of pediatric subspecialists.

Complications include hydrocephalus, sleep apnea, eye exposure issues when the eyelids can’t close completely and airway compromise that may require tracheostomy. Patients with Apert syndrome may have associated intellectual or developmental disabilities. Hearing loss and dental problems can accompany each of the syndromes.

The treatment approach is dependent on the associated anomalies. For example, patients with Apert, Crouzon and Pfeiffer syndromes are treated with similar procedures, such as midface surgery to correct the underdeveloped structures of the midface.

Apert syndrome, also called acrocephalosyndactyly, is a genetic disease in which the seams between the skull bones close earlier than normal during prenatal development, affecting the shape of the head and face. It is a form of syndromic craniosynostosis.

Individuals with Apert syndrome typically have a flat, elongated forehead, prominent or bulging eyes due to shallow orbits (eye sockets), recession or underdevelopment of the midface (maxillary hypoplasia), and a variety of other anomalies, including short stature or limbs of different lengths.

The characteristic feature that distinguishes Apert syndrome from other types of syndromic craniosynostosis is the presence of hand anomalies, most commonly fused or webbed fingers (syndactyly). These hand deformities can be quite severe and prevent your child from functioning normally.

Crouzon syndrome is a genetic condition in which the seams of the skull fuse in abnormal ways and affect the shape of the head and face. It is the most common type of syndromic craniosynostosis.

Crouzon syndrome shares many of the same features as Apert syndrome, including abnormal development of the eye sockets, prominent and widely spaced eyes, and slow development of the midface. In patients with Crouzon syndrome, the forehead generally appears more rounded with a more normally shaped nose, and the eyes tend to be more prominent. Another key difference is that patients with Crouzon syndrome do not have associated hand or feet anomalies present in other syndromes.

Muenke syndrome is a genetic condition in which one or more of the seams of the skull fuse too early in prenatal development. It is a form of syndromic craniosynostosis.

Generally characterized by an abnormally shaped head, wide-set eyes and flattened cheek bones, these facial and cranial differences are caused by the premature fusion of the coronal suture, the growth line which goes over the head from ear to ear. If one side is involved, your child may have an asymmetrical shape to the skull.

The upper face and eyes of patients with Muenke syndrome may be similar to patients with other forms of syndromic craniosynostosis, but they typically do not develop midface hypoplasia or retrusion of the midface requiring surgery. Hand and limb anomalies are also uncommon in this syndrome.

Pfeiffer syndrome is a genetic disorder in which some seams of the skull fuse too early in prenatal development. It is a form of syndromic craniosynostosis that is generally characterized by a high forehead, bulging and wide-set eyes, an underdeveloped upper jaw and beaked nose, as well as abnormalities of the hands and feet.

Patients with Pfeiffer syndrome look very similar to individuals with Crouzon syndrome. Appearance can vary depending on if your child is mildly or more severely affected, but a common characteristic is the appearance of short, broad thumbs and partial fusing of the fingers (syndactyly).

Saethre-Chotzen syndrome is a genetic disorder in which some seams of the skull fuse too early in prenatal development. It is a form of syndromic craniosynostosis generally characterized by a cone-shaped head, asymmetrical face, low-set hairline and droopy eyelids (ptosis). Most children with this disorder have a relatively flat face because of underdeveloped eye sockets, cheekbones and lower jaw. Some children with Saethre-Chotzen syndrome may have additional craniofacial anomalies such as cleft palate, low-set ears and dental issues. Children with Saethre-Chotzen syndrome also commonly have birth defects affecting the hands and feet. While some fusing of the fingers (syndactyly) may be present, they generally don’t have severe hand anomalies seen in Apert syndrome.